Gcat is a stealthy Python backdoor that uses Gmail as a command and control server. It’s fairly basic right now, but it’s an interesting proof of concept and if the community got behind it and contributed some new features it could be a pretty powerful piece of kit. 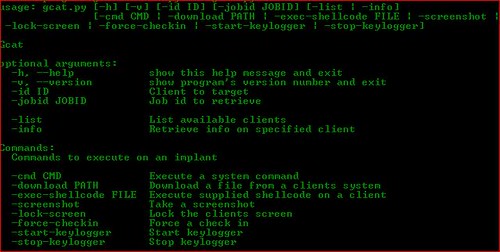 Feature wise it doesn’t have that much, you can’t upload files yet, but you can execute shellcode, download files and capture screenshots.

But as a concept it’s great, e-mail traffic? How many organisations will block that, especially to Google servers. Way less conspicuous than the typical IRC traffic.

For this to work you need:

In both files, edit the gmail_user and gmail_pwd variables with the username and password of the account you previously setup.

You’re probably going to want to compile implant.py into an executable using Pyinstaller.

Once you’ve deployed the backdoor on a couple of systems, you can check available clients using the list command:

Let’s issue a command to an implant:

Here we are telling 90b2cd83-cb36-52de-84ee-99db6ff41a11 to execute ipconfig /all, the script then outputs the jobid that we can use to retrieve the output of that command

Lets get the results!