If you’ve been reading regularly you would have probably noticed unavailability or extreme loading times during March. Anyway, it was about time I updated the look of the site and the functionality needed implementing properly so I took the change to put up a new theme and fix any inefficient parts of the old setup. So the server problems (and horribly slow handling of the problems by the ‘managed VPS’ company) led me to change server and pushed me to update the theme with a newer one that suites the latest version of WordPress better.

I had been using that dear old Tonus theme since 2004, it was getting a little worn around the edges. 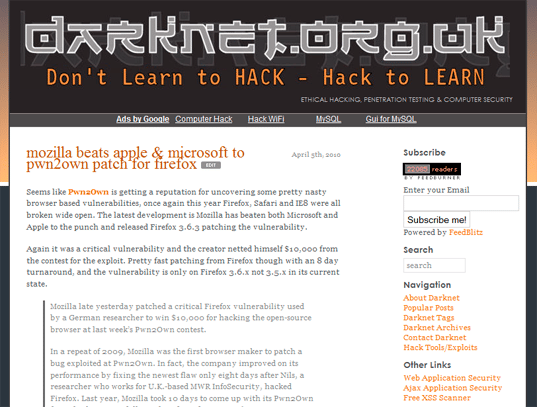 And well here we are, April 2010 a new look for Darknet. A wider column, more modern look and larger text for my old eyes. Layout wise I tried to keep as similar to the old layout as possible so people didn’t get lost, and well the layout was fine I think.

Anyway I’m gonna leave it for a few days without updating and I hope there is no bugs. New server is likely to be faster for most people (but sadly is slower for me over here in Asia).

I looked around for quite a while and found the top 3 managed VPS providers to be KnownHost, WiredTree and ServInt.

In the end ServInt seemed to be the best option, having been around the longest and having some customer testimonials from people who have been with them 6 years! Now that is impressive, plus they give a little hardware for the buck.

Feature wise, not much different – main thing is the site now supports threaded comments so you can reply to each other properly and I can reply to you.

If you spot anything wrong/any bugs/mistakes/odd looking tidbits or general nonsense do drop me a line and let me know.

DNS is a funny thing so you might alternate between seeing the old site and the new site for a couple of days.

16 Responses to The New Look Darknet & A New VPS