InsomniaShell is a tool for use during penetration tests, when you have ability to upload or create an arbitrary .aspx page. This .aspx page is an example of using native calls through pinvoke to provide either an ASP.NET reverse shell or a bind shell.

It was first released in January 2002 with version 1.0 of the .NET Framework, and is the successor to Microsoft’s Active Server Pages (ASP) technology. ASP.NET is built on the Common Language Runtime (CLR), allowing programmers to write ASP.NET code using any supported .NET language. 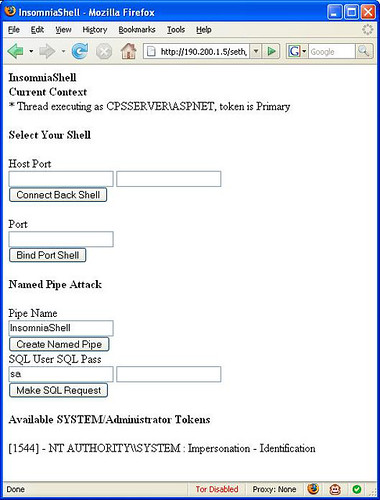 InsomniaShell has the added advantage of searching through all accessible processes looking for a SYSTEM or Administrator token to use for impersonation.

If the provider page is running on a server with a local SQL Server instance, the shell includes functionality for a named pipe impersonation attack. This requires knowledge of the sa password, and results in the theft of the token that the SQL server is executing under.

Grype – Vulnerability Scanner For Container Images & Filesystems
Grype is a vulnerability scanner for container images and filesystems with an easy to install binary that supports the packages for most major *nix based OS.
April 19, 2021 - 243 Shares

APT-Hunter – Threat Hunting Tool via Windows Event Log
APT-Hunter is a threat hunting tool for windows event logs made from the perspective of the purple team mindset to provide detection for APT movements hidden in the sea of windows event logs.
March 5, 2021 - 258 Shares