Twittor is a stealthy Python based backdoor using Twitter (Direct Messages) as a command and control server. This project has been inspired by Gcat which does the same but using a Gmail account. 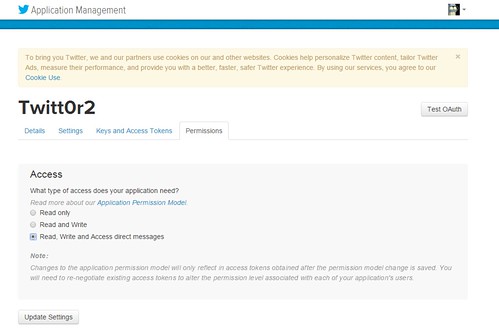 For this to work you need:

In both files, edit the access token part and add the ones that you previously generated:

You’re probably going to want to compile implant.py into an executable using Pyinstaller. In order to remove the console when compiling with Pyinstaller, the flags --noconsole --onefile will help. Just saying.


In order to run the client, launch the script.

You’ll then get into an ‘interactive’ shell which offers few commands that are:

Once you’ve deployed the backdoor on a couple of systems, you can check available clients using the list command:

The output is the MAC address which is used to uniquely identifies the system but also gives you OS information the implant is running on. In that case a Linux box.

Let’s issue a command to an implant:

Here we are telling B7:76:1F:0B:50:B7 to execute cat /etc/passwd, the script then outputs the jobid that we can use to retrieve the output of that command.