Malheur is a automatic malware analysis tool for the automatic analysis of malware behaviour (program behaviour recorded from malicious software in a sandbox environment). It has been designed to support the regular analysis of malicious software and the development of detection and defence measures. Malheur allows for identifying novel classes of malware with similar behaviour and assigning unknown malware to discovered classes. 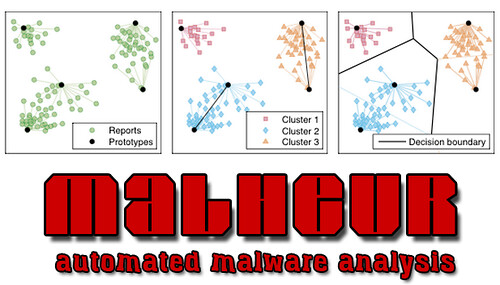 Malheur builds on the concept of dynamic analysis: Malware binaries are collected in the wild and executed in a sandbox, where their behavior is monitored during run-time. The execution of each malware binary results in a report of recorded behavior. Malheur analyzes these reports for discovery and discrimination of malware classes using machine learning.

Malheur can be applied to recorded behavior of various format, as long as monitored events are separated by delimiter symbols, for example as in reports generated by the popular malware sandboxes CWSandbox, Anubis, Norman Sandbox and Joebox.

It supports four basic actions for analysis which can be applied to reports of recorded behavior: