So, today we have a tale of the fabled American knee-jerk reaction, kid arrested for clock he built – this time to a 14-year-old Muslim boy who made a cool clock and brought it to school. He got arrested, cuffed and fingerprinted – over a science project. Yah, arrested for building a clock.

That seems like a slightly harsh reaction, perhaps because his name is Ahmed? Or he’s Muslim? Or 9/11 was just a few days ago? Or all of the factors combined, and the fact his clock bleeped in class. 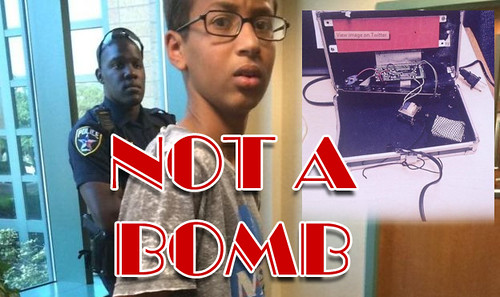 The coolest part? He was arrested wearing a NASA t-shirt.

Texas police have decided not to charge a 14-year-old Muslim boy who was arrested for bringing a homemade clock to school.

Officials at MacArthur High School in Irving alerted police because they thought the device was a “hoax bomb”.

Ahmed Mohamed’s arrest has been sharply criticised, and the boy has received an outpouring of support including an invitation to the White House.

Ahmed’s family believes he was detained because of his name.

“We have always had an outstanding relationship with the Muslim community,” Irving Police Department chief Larry Boyd said on Wednesday. “Incidents like this present challenges. We want to learn how we can move forward and turn this into a positive.”

The boy was placed in handcuffs and fingerprinted. He was released after it was determined there was no threat.


Zuck posted his support for Ahmed too.

You’ve probably seen the story about Ahmed, the 14 year old student in Texas who built a clock and was arrested when he…

You can see the stream of support for the kid, and the rallying against the cause with the Twitter hashtag #IStandWithAhmed

It’s turned into quite something with POTUS, Hilary Clinton, the US Secretary of Education and many many more getting involved.

Under the hashtag “#IstandwithAhmed,” thousands of Twitter users praised the boy’s initiative and questioned why he was detained including Nasa scientists and US President Barack Obama.

“Cool clock, Ahmed. Want to bring it to the White House? We should inspire more kids like you to like science. It’s what makes America great,” Mr Obama wrote on Twitter.

The Council on American-Islamic Relations says it is investigating the incident.

Check out the Tweet from POTUS, he’s not impressed with the kid arrested for clock scenario.

Cool clock, Ahmed. Want to bring it to the White House? We should inspire more kids like you to like science. It's what makes America great.

It’s all getting very intense.