Evil Foca is a network attack toolkit for penetration testing professionals and security auditors whose purpose it is to test security in IPv4 and IPv6 data networks. 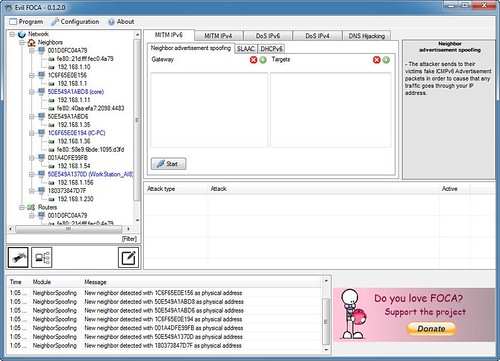 The software automatically scans the networks and identifies all devices and their respective network interfaces, specifying their IPv4 and IPv6 addresses as well as the physical addresses through a convenient and intuitive interface.

The tool is capable of carrying out various attacks such as:

Each is explained more in depth in the following section.


Man In The Middle (MITM) Techniques

The well-known “Man In The Middle” is an attack in which the wrongdoer creates the possibility of reading, adding, or modifying information that is located in a channel between two terminals with neither of these noticing. Within the MITM attacks in IPv4 and IPv6 Evil Foca considers the following techniques: