It is capable of passive as well as active scanning and this latest is its real value added. It enables to automatize the discovery of common vulnerabilities (XSS, LFI, SQL injections etc) in web applications. 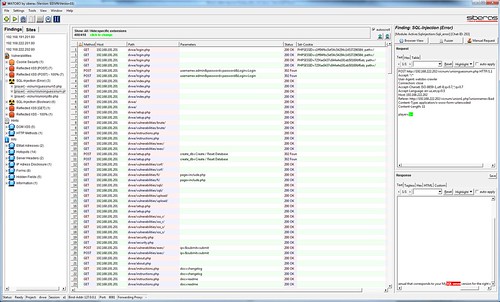 WATOBO works like a local proxy, similar to ZAP, Paros or Burp Suite but in Ruby, when the rest are pretty much in JAVA.


During a scan all selected active modules will be used to test the one or more chats (chat = request/response pair). The total amount of resulting requests is hard to predict because in most cases it depends on the number of parameters and the module itself. Here’s the list of the currently available active checks:

BTCrawler is an application used to to discover Bluetooth devices and the services they provide, it is useful if you wish to know which Bluetooth enabled devices are in your proximity for debugging, spying, curiosity or any other purpose. 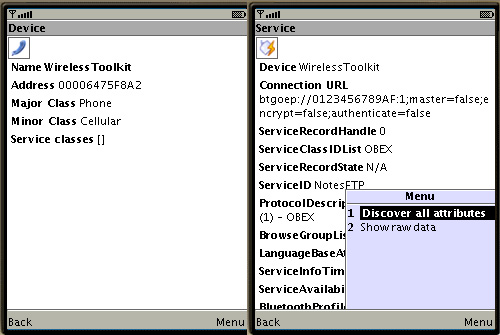 With this program you’ll be even able to find every service provided by those devices and to list all its Bluetooth attributes.

When the application is started, it firstly enables the Bluetooth service on the device if it was not already on and then it searches for information about all pre-known devices. During those operations a wait screen is shown. Please be patient, because the initial loading can take a little long.


All known properties of any discovered device will be shown. Such properties include:

It will then iterate through the services available on the device, and of those services it will attempt to discover the service attributes of each available service.

Unix-privesc-checker is a Unix/Linux User privilege escalation scanner that runs on Unix systems (tested on Solaris 9, HPUX 11, Various Linuxes, FreeBSD 6.2). It tries to find misconfigurations that could allow local unprivileged users to escalate privileges to other users or to access local apps (e.g. databases). It is written as a single shell script so it can be easily uploaded and run (as opposed to un-tarred, compiled and installed). It can run either as a normal user or as root (obviously it does a better job when running as root because it can read more files).

unix-privesc-check is intended to be run by security auditors and penetration testers against systems they have been engaged to assess, and also by system administrators who want to check for “obvious” misconfiguration. It can even be run as a cron job so you can check regularly for misconfiguration that might be introduced.


The author wanted to write something that was at least partially useful to penetration testers when they gained access to a low-privilege account and wanted to escalate privileges. There are lots of things that pen-testers will check in this situation and one of the most tedious to check is weak file permissions – this of often one of the most fruitful, though, so there’s no avoiding it.

Instead of installing the OS then painstakingly assembling your collection of security tools (and package dependencies), using something like Parrot Security OS takes care of all that for you. 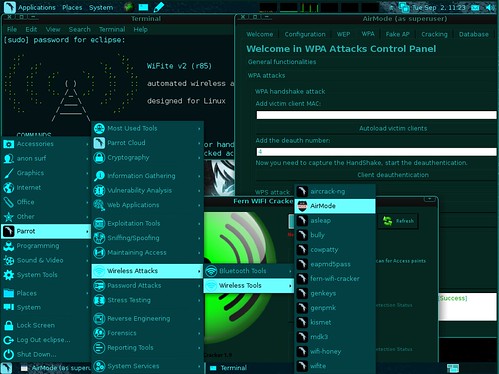 It is based on Debian and developed by Frozenbox network. Parrot is designed for everyone, from the Pro pen-tester to the newbie, because it provides the most professional tools combined in a easy to use, fast and lightweight pen-testing environment, and it can be used also for an everyday use.


Rather than downloading the whole ISO, there’s also a BASH script version which turns a regular Debian Stable install into Parrot Security OS, you can find the script here:

And another password shocker, a few days after ‘cloud’ password service LastPass was pretty seriously hacked (yah if you’re using it, change your master password) critical 0-day flaws in Apple’s password storing keychain have been exposed. 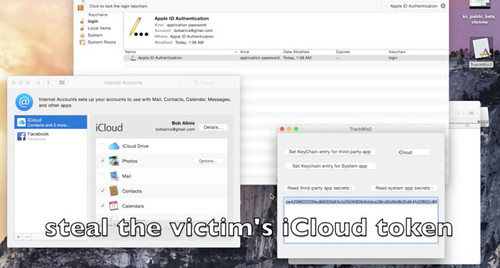 Which is kinda funny, as after the LastPass hack I saw some people espousing the usage of Apple’s keychain as much more secure. And now, Apple’s keychain cracked – and in a really serious way.

Attackers can steal passwords from installed apps, including the native email client, without being detected, by exploiting these bugs.

The team was able to upload malware to the Apple app store, passing the vetting process without triggering alerts. That malware, when installed on a victim’s device, raided the keychain to steal passwords for services including iCloud and the Mail app, and all those stored within Google Chrome.

Lead researcher Luyi Xing told El Reg he and his team complied with Apple’s request to withhold publication of the research for six months, but had not heard back as of the time of writing.

They say the holes are still present in Apple’s software, meaning their work will likely be consumed by attackers looking to weaponize the work.


It’s pretty serious as they managed to bypass the app store vetting and can grab access tokens and data from other apps on the device including high profile apps like Facebook, Evernote and iCloud itself even while sandboxed.

The sad part is, Apple was notified about this 6 months ago and still haven’t fixed it – the only fast moving response came from Google’s Chromium security team who removed keychain integration for Chrome, noting that it could likely not be solved at the application level.

“Recently we discovered a set of surprising security vulnerabilities in Apple’s Mac OS and iOS that allows a malicious app to gain unauthorised access to other apps’ sensitive data such as passwords and tokens for iCloud, Mail app and all web passwords stored by Google Chrome,” Xing told The Register’s security desk.

“We completely cracked the keychain service – used to store passwords and other credentials for different Apple apps – and sandbox containers on OS X, and also identified new weaknesses within the inter-app communication mechanisms on OS X and iOS which can be used to steal confidential data from Evernote, Facebook and other high-profile apps.”

The team was able to raid banking credentials from Google Chrome on the latest OS X 10.10.3, using a sandboxed app to steal the system’s keychain data and secret iCloud tokens, and passwords from password vaults.

If any malicious teams are out there using this, it could be really bad – and well if they aren’t already using it my bet is they will be by tomorrow.

I guess it’ll probably be blocked from the app store by then though, now it’s getting widespread media coverage.

Just-Metadata will allow you to quickly find the Top “X” number of states, cities, timezones, etc. that the loaded IP addresses are located in. It will allow you to search for IP addresses by country. You can search all IPs to find which ones are used in callbacks as identified by VirusTotal. Want to see if any IPs loaded have been documented as taking part of attacks via the Animus Project, Just-Metadata can do it.

Additionally, it is easy to create new analysis modules to let people find other relationships between IPs loaded based on the available data. New intel gathering modules can be easily added in just as easily.

Ideally, you should be able to run the setup script, and it will install everything you need.

For the Shodan information gathering module, YOU WILL NEED a Shodan API key. This costs like $9 bucks, come on now, it’s worth it :).

I’ll be looking forwards to future versions with cli based input and output for scripting and chaining this with other tools, with a bit of data crunching and pattern matching/machine learning it could be turned into a fairly intelligent attack pre-warning system.