This is not the first Flash Zero Day and it certainly won’t be the last, thanks to the Sandbox implemented in Chrome since 2011 – users of the browser are fairly safe.

Those using IE are in danger (as usual) and certain versions of Firefox. 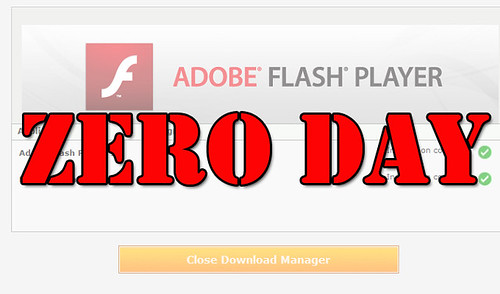 It has been rolled into the popular Angler Exploit Kit, which seems fairly prevalent although not as popular as Blackhole historically.

The vulnerabilities affected Flash Player versions up to 15.0.0.223 and the latest 16.0.0.257, he said. Punters on Windows 8.1 are safe, along with those using Google Chrome thanks to use of sandboxing.

Those operating other Windows platforms with Internet Explorer versions 10 and below, and some Mozilla Firefox versions, have been confirmed as vulnerable to the exploit. The free version of MalwareBytes’ Anti-Exploit tool prevented the attack, but it is as yet unknown if Microsoft’s Enhanced Mitigation Exploit Tool can fight the attack.


It’s not yet known if Microsoft EMET blocks this attack, but MBAE does.

It seems like the drive by malware slingers are stepping up their game and investing time into obfuscation and encrypted payloads to make detection/blocking more difficult.

The exploit kit drops the Bedep trojan which could serve as a persistent advertising slinger and malware downloader, (last version of Win7 at least) is bypassed. Angler remains one of the most proflic exploit kits.

The zero-day came as Cisco warned separately that exploit kit writers were taking more time to write obfuscated code. This would ostensibly prolong the life of investments such as the discovered Flash zero day that would decrease in effectiveness after users applied the imminent Adobe patches. Cisco bods in a new annual report (pdf) painted Angler as the most active kit last year, followed by Sweet Orange and Goon.

“Angler’s use of Flash, Java, Microsoft Internet Explorer, and even Silverlight vulnerabilities makes this exploit kit the ‘one to watch’,” Cisco bods said.

“Once the exploit is triggered, the malware payload is written directly into memory in a process such as iexplore.exe, instead of being written to a disk. “The payload delivered by Angler looks like a blob of encrypted data, which makes it harder to identify and block.” Angler was more popular having spiked in August thanks to a developer decision to nix the need to download Windows executables to foist malware.

It seems like there’s quite a few Exploit kits floating around, which basically bundle together a whole set of exploits and pop a web browser however they can to install further malware, things like Bedep just slurp down even more malware and install that covertly on a victims machine.

That’s usually why when you see an infected machine, it has a LOT of malware on it – not just one thing.